Tecumseh’s Staff is comprised of an experienced, caring team many of whom are lifetime educators and alumni. Several have been at camp for over 50 years! The ratio of counselors to campers is approximately 1:4.

Doug Knight has built his career around his passion in life – sports. His first love of ice hockey was eclipsed by lacrosse as he attended the University of Virginia as a student athlete in college. 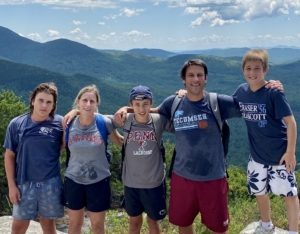 Throughout his four years there he gathered a number of notable honors including the ACC Academic Honor Roll, Division 1 Player of the Year, Division 1 All American, and finally as Captain of the team in 1997 (he was inducted into the National lacrosse Hall of Fame in 2017). He then stayed at UVA to coach lacrosse for two years, in the second year winning the National Championship and learning the importance of team leadership and mentoring in the process.

Doug moved on to teaching and coaching multiple sports at St. Paul’s School in Maryland in 1999 and then, after meeting his wife at a summer lacrosse camp, to the Haverford School in 2002 where he taught, became the middle school Athletic Director, and then Associate Director of Admissions and Tuition Assistance.

Doug is a strong communicator, inspiring, intelligent and articulate, with a warm and friendly demeanor. A self-starter, Doug has also recently developed a two night, weekend lacrosse camp for fathers and sons in both VA and NJ, which he believes makes for a stronger relationship while also having fun. Most importantly though, Doug believes in the well rounded boy and feels that Coaches and Parents are going down the wrong path by pushing their sons to excel in one particular sport. As the father of three young boys, Doug backs up this belief by making sure they are involved in as many sports as possible.

Assistant Director and Head of Tutoring

Blake started as a camper in 1993 and has been at Tecumseh ever since. Currently serving as Assistant 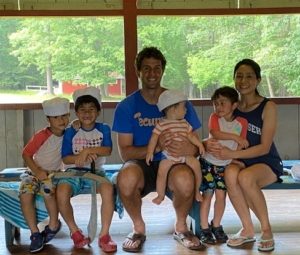 Director, Blake has seen it all at Camp. Over the years he has been in every cabin as a camper or counselor, was the Editor of the Sunbeam, served as Head of Council, and worked on multiple staffs over the years including soccer, baseball, and basketball.

When not at Camp, Blake works at Conestoga High School in Berwyn, PA, where he teaches Social Studies and coaches soccer.

Recently, Chigusa has joined the Tecumseh family as well as their four sons, Grayden (Grady), Nolan, Duncan and Austin. Chigusa is a math teacher at Harriton High School in Rosemont, PA and runs the tutoring program at Camp, while the boys are currently counting down the days until they can become campers!

Paul Poiesz spent 25 years as the coach of track and field at Bishop McDevitt H.S. just outside of Philadelphia. He coached countless All-League, All-State and All-American athletes while there and currently is the assistant coach at Central Bucks South H.S. In addition, Paul is a USA Track and Field certified Master Official who works as a starter at track meets around the nation, including the Penn Relays. He is also the Math Department Chair at Conestoga H.S. in Berwyn, PA. Paul leads our track program at Tecumseh and supervises the Junior Counselors as a part of camp’s senior staff. He is also out internal operations manager in charge of all transportation for camp.

Carolynn and Paul met at camp Robindel 35 years ago and love it up at camp! Carolynn runs the camp store currently as well as daily cabin inspections. At home, outside of Philadephia, Carolynn teaches at Our Lady of Mt Carmel School. 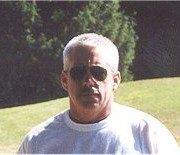 Jay first came to Camp Tecumseh in 1962 and just celebrated his 50th year at Camp! He is in charge of all day and overnight land trips. He is an EMT, a volunteer fireman and a mountaineer extraordinaire! He has been part of several climbing expeditions in the Himalayas including ascents of Mt. Everest! In addition to the Trips programs, Jay is a mentor for the counselors on Senior campus. He lives at Tecumseh year round.

Coach Doc has been at Tecumseh since 1979 as a camper and counselor. He is currently our Athletic Director, and responsible for the daily schedule of activities for camp which he reads at meals to the cheers of the campers.

As a former college basketball player, he has headed the basketball program at Tecumseh which was started by his father, and legendary basketball coach, Dan Dougherty.

In the offseason Coach Doc is a teacher and coach at Charlotte Country Day School in North Carolina.

Head of Maintenance and Laundry 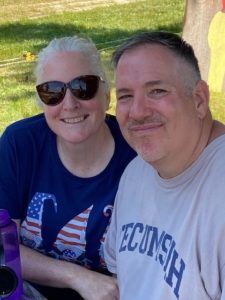 Rob and Eileen have been part of Camp Tecumseh for over 20 years. They do so many little things that go unnoticed around campus. Rob has spent time as a cabin counselor as well as the Head of Senior Campus. He has coached on the wrestling and lacrosse staffs as well. Currently Rob is in charge of maintenance during the summer months.

Eileen has also had multiple rolls at CT helping out in the office and with the camp store over the years. Currently she is in charge of the laundry service at camp.

Director of Theater and Internal Archivist

Mark has worn many different hats since being elected Captain of the Junior Three Grays during his first summer in 1966.  As a camper, soccer counselor, director of the Gilbert & Sullivan operetta, program director, and assistant director, Mark has always worked hard to make each summer a great success for everyone.  His early experiences at camp led Mark into teaching, and he is currently the longest-serving teacher at Episcopal Academy.  Today Mark works in two distinct areas in camp: the Opera House and the Archives Room.  Since 1979 he has directed the Gilbert & Sullivan operetta and recently created “Stagework” to introduce all campers to the wonderful world of live theater.  In the Archives Room, Mark helps maintain Tecumseh’s vibrant archival efforts. He also creates articles for the Sunbeam and Alumni Newsletter and shares archival pictures and stories with the camp family. 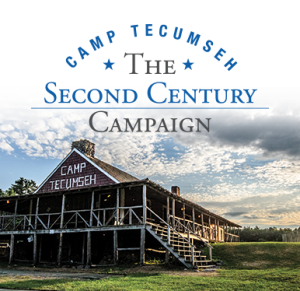